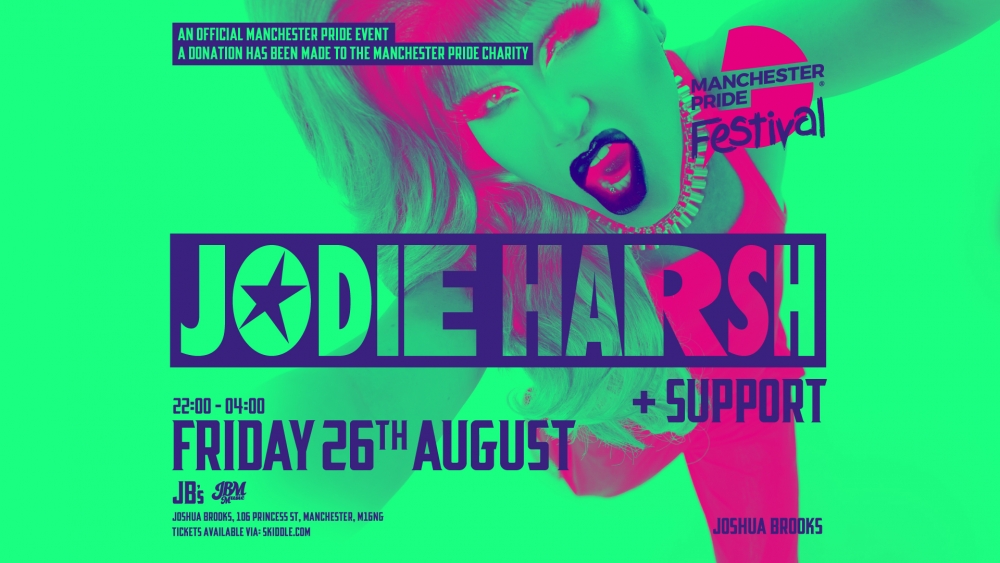 As the Gay Village Party stages come to a close heads to Joshua Brooks on Friday 26th August with the incredible Jodie Harsh + support!
Jodie Harsh is the London producer, songwriter, remixer, DJ Icon and reigning Queen supreme over international nightlife. Famous for her trademark blonde beehive and thumping DJ sets at clubs, festivals and A-List parties, Harsh spins on all four corners of the globe.
Beyonce, Fergie, Cher and Justin Timberlake have had the Harsh treatment on remixes, which include 3 US Billboard Dance Chart No.1’s and not to account Jodie’s numerous writing and production credits with artists from Charli XCX to Example.

In 2021 Jodie’s profile has never been bigger, since signing to Warner Records in February. Her first single ‘My House’ on the Warner label was playlisted at Radio 1, KISS, Capital Dance, KISS, Gaydio and has been streamed over 7 million times. Her current single ‘No Sleep’ co-written with SG Lewis and hit maker Jin Jin has been received equally as well at radio with Jodie been asked to host the prestigious Radio 1’ Friday Night Dance Party in place of Annie-Mac to an incredible response and co-hosting Radio 1’ Dance Anthems with Charlie Hedges.

With live re-opening Jodie didn’t waste time tearing up dance floors with a run of sold-out headline shows all over the UK and festival appearances at Creamfields, Wilderness, Silverstone – F1 Grand Prix, Mighty Hoopla, Manchester Pride, Birmingham Pride, Homobloc, Printworks and more before supporting Jax Jones in October and ending 2021 in style with supporting Jessie Ware on her full UK Tour in December.

Harsh’s influence stem from disco, Early 90’s house music and the Vouge Ball scene. Jodie is the absolute centre of popular dance music as well as underground, cutting edge nightlife. She brings the sickest energy to a record or a dance floor.

There’s only one Jodie Harsh, and the beats are fierce.


GET YOUR TICKETS NOW