ResourcesTrans & Non-binaryAll Equals Charter
On Liberation From Patriarchy: A Case For Trans Inclusion 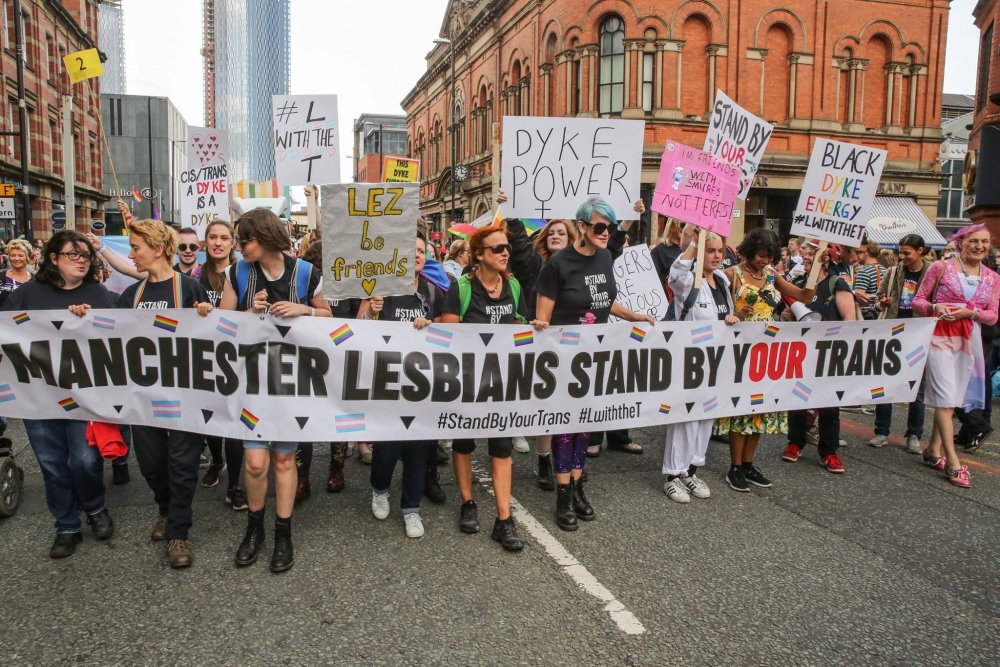 Photography: Carl Sukonik - The Vain Photos
In the UK today the need for feminism is more apparent than ever. According to Rape Crisis, 1 in 5 women have been sexually assaulted or raped in the UK, with over 63,000 cases reported in 2021 (more than ever before!) Meanwhile, according to the Office of National Statistics, 25% of women experienced abuse before the age of 16, and roughly a third of women (32%) have experienced harassment in the last year. With women being the primary recipients of social services and welfare benefits in the UK, as reported by the UN, austerity measures have meant that in today’s landscape a lot of women are undersupported, under-resourced, underpaid and are feeling the real struggles of (an intentionally fabricated sense of) scarcity. Scarcity leads to fear, a worry that access to opportunities will be limited to a select few, and it is from here that defensiveness breeds division.

Of course, for all of the above, women with multiple marginalisations are harmed all the more. For example, the Guardian reports that women of colour and trans people are most likely to be victims of crimes. Furthermore, according to Stonewall, 41% of trans people have survived hate crimes and 28% have survived domestic violence. It is for reasons such as this that contemporary feminism, debatably considered to be in its fourth-wave, is inherently intersectional. According to Nira Yuval-Davis, intersectionality is a theory concerned with ‘the differential ways in which different social divisions are concretely enmeshed and constructed by each other’ (pg. 205). Systems of patriarchy are inherently connected and upheld by systems of racism, colonialism, classism, ableism, cisnormativity, heteronormativity and so on, and thus contemporary feminism seeks to dismantle patriarchy in a way that will benefit all women across all marginalisations (and, indeed, all people across the vast spectrum of gender identieis). It is not enough to just serve the needs of white, cisgender and heterosexual women, to truly dismantle patriarchy we must fight to liberate everyone.


"It is not enough to just serve the needs of white, cisgender and heterosexual women, to truly dismantle patriarchy we must fight to liberate everyone."
— Dr. C Owen


The need for feminism to work across marginalisations is not a new idea. Sojourner Truth’s 1797 critique of white-centric definitions of womanhood is a famous example of intersectional feminism. And yet, over 200 years later, these problems still persist. There are many examples (here’s one) of people trying to define what it means to be a woman, but often within a framework that only works for some women and excludes others. This is not only an approach that Sojourner Truth was specifically criticising, but it is one that upholds a wide variety of systems of oppression, ignoring the specific experiences of those with multiple marginalisations. Furthermore, in the UK these conversations tend to work within a gender binary, a colonial endeavour to erase the multiple gender identities that exist across various cultures. When we insist there is one way to experience womanhood and one way to experience manhood (also known as biological essentialism), we not only ignore and erase the diversity of gender experienced across the UK’s intersectional communities, but also the diversity of gender experienced across the world. It’s not just transphobic, it’s racist.

Unfortunately, we are seeing a frightening rise in biological essentialism in the UK. This is often framed in a way that purports to be trying to protect (cis) women and preserve (cis) women’s safe spaces. However, these essentialist approaches tend to do the opposite. For example, according to Pearce, Erikainen and Vincent:

‘The cultural positioning of trans women as dangerous to cis women relies on gendered conceptualisations of (cis, implicitly white) women as necessarily fragile in relation to (cis) men, who in turn are conceptualised as having superior physical (and sexual) prowess. By positioning (cis, white) ‘females’ as a category uniquely vulnerable to the threat of ‘male’ violence (and especially ‘biological’ male sexual violence), trans-exclusionary arguments around toilet access – including those advanced by self-proclaimed feminist groups – lend support to the gendered and misogynistic discourses that have long positioned (white) women as the ‘weaker sex’ needing protection (by men, from men).’

The idea of women being the ‘weaker sex’ has historically been used to undermine women’s access to voting, legal recognition and rights, political power, bodily autonomy, economic independence and overall personhood. Feminists have fought for women to be seen as equals for generations, and efforts to undermine their competence and abilities functions only to limit their rights and freedoms.

There is a dangerous fear in the UK that supporting trans liberation could threaten the safety, rights and freedoms of everyone else, but especially of children and cis women. This transphobic fear is often unfounded, based more in hypotheticals than legitimate threats. For example, the fear that allowing trans people into single-sex spaces has insufficient empirical evidence, and the fear that trans affirming healthcare for minors is harmful fails to acknowledge the medical facts about the significant benefits of these processes. This is all exacerbated by the biases of the UK media (which give the false impression that anti-trans views are popular), as well as by high-profile public figures sharing their harmful opinions. Unfortunately, there are also transphobic fears within the LGB community, including cis lesbians claiming they feel pressured to have sex with trans women. Shon Faye’s response to this concern is imperative:
‘Ultimately everyone has a right to set sexual boundaries for any reason and to not feel pressured sexually on an individual basis. Yet [...] Trans lesbians have as much of a right as any other lesbian to pursue sexual and romantic connections in an appropriate and consensual way, without being misrepresented as predatory men’ (pg. 214).

The key issues here are inherently feminist for all parties: bodily autonomy (which no one should threaten, cis or trans) and everyone being believed for who they are (including both cis and trans lesbians). Thus, in the midst of growing violence against women, while it is legitimate to want to protect everyone’s safety, it is also important to base our approaches to safety in intersectional feminism, rather than in ways that uphold patriarchy and threaten the rights of all involved.

The political and legal aims of the feminist movement directly benefit from improving trans legal rights. The fight to ensure that (cis) women have equal rights and freedoms has included endeavours to ensure that people have bodily autonomy (such as abortion access) and are believed about their experiences (for example, during rape trials). These same issues are at the heart of trans liberation, with bodily autonomy and being believed both key campaign points in the fight for improved access to gender affirming healthcare. It is no surprise that the people who fight against trans specific rights are often the same people who fight against women’s rights more generally. Work to limit the rights and freedoms of trans people is well underway in the UK, especially by the Equality and Human Rights Commission. Without these key rights for trans people it sets a legal precedent to question the autonomy and legitimacy of cis women’s bodies and experiences as well, meaning that the oppression of trans people is a direct threat to the aims of the feminist movement. Thus it is important that those who call themselves feminists are paying attention to issues of transphobia and are fighting back.

Liberation is not just a legal and political battle, it is also a social endeavour. The inclusion of trans people in feminism allows for important opportunities for dismantling patriarchy. As Shon Faye argues:

‘The existence of trans people ought to make everyone take a long hard look at their own dearly held ideas about gender, and wonder whether these ideas are quite as stable and certain as they once thought. This would be healthy. [...] feminist hostility to non-binary people reasserts the notion of an inescapable biological sex that should be given more social and legal credence than a variant gender identity, a notion that merely replicates patriarchy’s own logic’ (pg. 259).

If patriarchy is a system that insists on limited notions of sex, gender and gender roles, then queer people’s (especially trans and non-binary people’s) refusal to conform to these roles creates an opportunity for everyone to do the same (to learn more, click here!) There is an opportunity to learn from one another, uplift one another’s experiences and approaches to gender, gender roles and gender expressions (or lack-thereof) and find liberation together in a coalition against patriarchy.

"The only people who should be afraid of the role trans and non-binary people play in shaping contemporary notions and laws regarding sex, gender and gender roles are people who seek to uphold patriarchy."
— Dr. C Owen


The only people who should be afraid of the role trans and non-binary people play in shaping contemporary notions and laws regarding sex, gender and gender roles are people who seek to uphold patriarchy. As feminism is a movement that has historically fought to dismantle patriarchy, not only bringing about an equality of the sexes but also a liberation from oppressive constructions of identity and social relations, then it is a movement inherently involved in trans liberation as well. To reject trans liberation is to reject feminism.