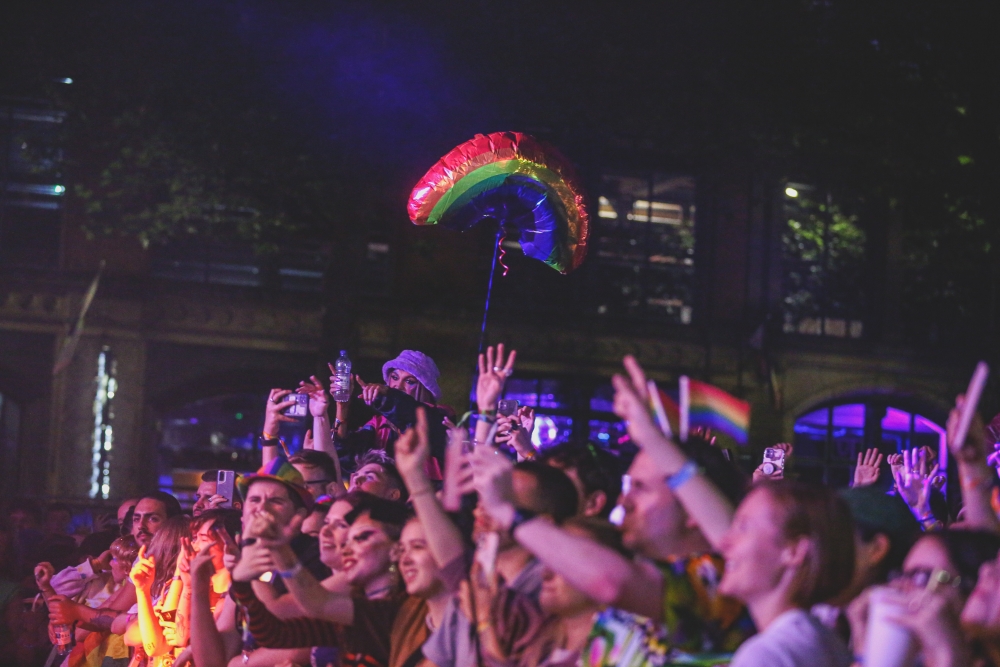 Tickets are now on sale for the world-famous Gay Village Party, with money going directly to good causes in Greater Manchester

The programme of events for this year’s Manchester Pride Festival in partnership with Virgin Atlantic has been announced, including the famous Gay Village Party, with tickets now on sale.

Day tickets and weekend tickets are available for the Gay Village, with low income, family tickets and VIP options available. £2.50 from every ticket will be ring-fenced as a donation to the Manchester Pride Community Fund, with the money going directly to LGBTQ+ causes and projects in Greater Manchester through the distribution of grants.

The Gay Village Party will be packed with entertainment across three stages, with the Alan Turing Stage bringing an exciting and diverse range of performances across the weekend, the MancUnity Stage celebrating the very best in local queer talent, and new for 2022: the Cabaret Stage featuring some legends of the Manchester scene.

Surrounding these stages will be the ultimate street party, with an array of markets, performances and parties across the venues in the village throughout the August bank holiday weekend.

“We’re delighted that after a couple of years restricted by Covid, we’re able to announce the exciting schedule of events that will make up this year’s Manchester Pride Festival, with six out of seven of our events being free to attend. - Mark Fletcher, CEO

“A further breakdown of where the revenue from ticket sales goes can be found on our website.”

Other events announced as part of the Pride celebrations include Youth Pride MCR and Family Pride MCR, where young people and families will be able to join in the celebrations with a series of free curated events.

Superbia, Manchester Pride’s year-round programme of arts and culture, will host the Superbia Weekend, offering a series of alcohol-free events for those who wish to celebrate their Manchester Pride in a more tranquil environment.

On Thursday 25 August, the Human Rights Forum will take place in the flesh for the first time, bringing together prominent activists and thought leaders to consider the challenges faced by the LGBTQ+ community today. This event will be developed and delivered in partnership with LGBT Foundation and will consist of powerful talks, rallying, spoken work and other thought-provoking performance.

As announced previously, the centrepiece of Manchester Pride, the Parade, will return on Saturday 27 August, where tens of thousands of LGBTQ+ people and allies will march through the city together for peace, equality and acceptance, with thousands more lining the streets.

Rounding off the celebrations on Monday 29 August will be the Candlelit Vigil in Sackville Gardens with HIV support charity George House Trust.

Mark Fletcher continued: “Community is at the heart of everything we do at Manchester Pride, and it’s important for us to close the event with a moment of reflection as Sackville Gardens are transformed into a sea of flickering candles to remember those we have lost to HIV/AIDS and unite us in the worldwide fight against the epidemic and the stigma which sadly still exists.

“We look forward to making this year’s Manchester Pride Festival more community-led, more diverse and more accessible than ever, and through working more closely with our communities we truly believe we have a programme of events that includes something for everybody supporting our activist roots.”

Tickets for this year’s Gay Village Party are available at manchesterpride.com.

Manchester Pride Festival, in partnership with Virgin Atlantic, is its annual flagship event that takes over the city every year across the August bank holiday weekend in celebration of LGBTQ+ life. This year’s event will take place on Friday 26 – Monday 29 August 2022.

The 2022 ticket pricing structure is as follows:


£2.50 from every ticket will go directly into the Manchester Pride Community Community Fund.

The breakdown of the remaining ticket revenue is as follows:

Tickets purchased through Ticketmaster will be subject to a 10% service charge, this is on the face value of the ticket only and not the £2.50 donation.